Statute of Limitation in Businesses [2022]

Articles » Statute of Limitation in Businesses [2022]

This statute of limitations defines the time limits after an event beyond which one can no longer file a case against another party. 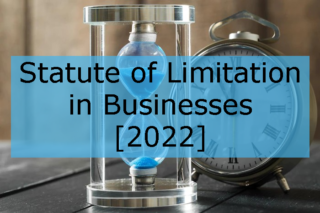 What is the Statute of Limitations?

Unlike many other European countries and the USA, there is no official statute of limitations for criminal cases in the UK. However, the UK does have particular legislation which deals with a limitation period within which a person can bring a civil claim against the other party.

The Limitation Act 1980 provides a limitation period for civil cases in the UK. This statute provides a time limit within which a claim may be brought only in civil cases.

Once the time period prescribed by the statute has been passed or expired with respect to any civil claim, this generally provides a valid defence for any defendant against whom a cause of action has been brought. The defendant can take the defence that the cause of action is time-barred or statute-barred.

This means that the court will not entertain such a time-barred claim because it was not brought within the time period prescribed by the statute.

What is the time limit for a claim?

There are different types of civil claims and each civil claim has its limitation period prescribed by the Limitation Act 1980. Such period acts as a trigger to bring a claim within those time limits else the claim of the claimant will be time-barred.

These include the following:

There will be claims which might fall under multiple categories whereas, other claims such as fraud against the trustee of a trust is not subject to any limitation period.

When does the clock start when calculating limitation periods?

When does the clock stop when calculating limitation periods?

Again this depends on the type of cause of action as to what is the applicable time period and when the clock stops running for that particular claim. As mentioned above, for most contractual and tortious claims, the limitation period is 6 years and it starts from the date when the cause of action occurred.

However, while calculating the date on which time period expires, the date of which the cause of action started can be ignored in some cases. Normally, the claimant will have a total period of 6 years plus one day to initiate the claim.

Why do prescribed time limits for civil claims exist?

Where the claimant wants to recover money owed by the defendant or seeking damages by way of compensation or for injury sustained by the claimant because of the defendant’s negligence, then any time limit prescribed to bring a civil claim may seem unfair. However, due to public policy reasons, such time limits are prescribed.

Where such time limits are not prescribed, it can have adverse consequences because otherwise, one will be able to bring a claim at any point in time. As a result, individuals and organisations would be at the risk of litigation perpetually and even in circumstances where the evidence, including the recollections of witnesses, is likely to diminish. This would have become difficult for courts to decide a case fairly which might result in an unfair decision or outcome.

Prescribing a time period is considered for public policy reasons and to save the public by time barring claims once a specified period to being a claim has been passed. Such time limits vary from different types of civil claims, however, the purpose to prescribe those limits is the same. It is to ensure certainty in litigation and to avoid unfair outcomes from the time-barred claims.

What is the role of the Limitation Act 1980?

As mentioned above, the Limitation Act 1980 plays an important role in the civil justice system in the UK. By providing the limitation period within which a claim can be brought, it ensures that there is a prescribed limitation period to avoid the risk of perpetual litigation claims. Having said that, it doesn’t prevent a claimant to bring an action against the defendant once a particular time period has passed.

The Limitation Act 1980 also gives discretion to the court to extend the time limit prescribed by the statute in certain cases. This generally happens in cases where there are good reasons to believe that there was fraud, deliberate concealment of facts by the defendant or mistake.

Because this has been recognised that very strict interpretation and application of limitation period might produce some harsh and unjust results, therefore flexibility may be required in some cases where it is necessary to prevent injustice.

The adoption of such an approach can, unfortunately, create some uncertainty in cases where the court will allow a time-barred claim to proceed even when it was brought after the expiry of the limitation period.

The impact of Pre-Action protocols on the limitation periods

Pre-Action Protocols are provided under the Civil Procedure Rules. These laid down the steps which the court would expect the parties to follow to bring a claim and commence proceedings for a particular type of civil claim.

These are basically set out with a view to resolving the dispute between the parties without the claimant being required to bring the claim before the courts.

This protocol does not prevent a defendant from taking a defence in case of court proceedings that the claim is time-barred and hence expired. However, the parties may be able to get a stay from the court to complete the required pre-action steps.