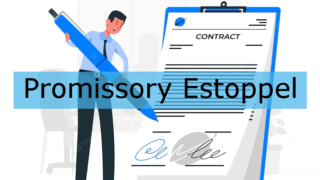 Estoppel is an legal principle that prevents a party from going back on words or conduct if another party has acted on either; specifically, promissory estoppel protects those who have acted to their detriment on the basis of a promise.

Whilst there are different types of estoppel, the most common estoppel in contract law is promissory estoppel which protects a person who is now in a position of economic loss because another party has failed to act in the way they had promised to do so – even if no formal contract has arisen.

However, this principle is not meant to overeach the general concepts of contract law and applies only in specific cases in order to relieve agrieved parties:

This article discusses the doctrine of promissory estoppel, case laws, its role in contract law and its elements in detail.

What is a promissory estoppel?

The equitable remedy of promissory estoppel (or equitable estoppel as it is sometimes referred to) provides a means of enforcing a gratuitous promise even though the promisee has provided no consideration. In other words, promissory estoppel prevents a person reneging on a promise of future action. It has been described as a mechanism for enforcing consistency.

This doctrine means if one party suffers damages as a result of breach of promise by the promisor on which the promisee relied to his detriment, then the promisee can recover damages from the promisor.

However, in certain circumstances, the court may waive this requirement of consideration in order to ensure justice and fairness and may enforce a promise even in the absence of any consideration provided the promisee relied on the promise made by the other party and it results in a detriment to the promisee.

How doctrine of Promissory Estoppel arose in case laws?

Facts: In 1937, the defendant entered into a long-term lease for a block of flats. Many of the flats remained unoccupied, however, due to the outbreak of World War II, the claimant agreed to reduce the rent by half. By 1945, the block was fully occupied and the claimant asked for full rent from the High Trees.

The claimant sued the defendant for the payment of full rent that was initially agreed between the parties before they revised the rent. On the other hand, the defendant argued that the revised agreement to pay the reduced rent applies to the entire lease period and the claimant erred in claiming a higher rent after the end of World War II.

Issue: Whether the claimant is entitled to recover full rent from the defendant for the period of World War II?

Judgment: the High Court held that the claimant was entitled to the full rent from the time the block was fully occupied after the end of World War II. The Court held that any attempt to claim the balance of the rent between the years 1940 to 1945 would be prevented by the doctrine of promissory estoppel because the defendant had relied on the claimant’s promise. The doctrine is a shield, not a sword.

What are the elements ?

The elements of promissory estoppel are given below:

The claimant was prevented from enforcing the bill against the director personally because the claimant’s written words amounted to a promise that acceptance in that form would be accepted by [‘Michael Jackson’] as a regular acceptance of the bill. This resulted in a promissory estoppel, because it would be inequitable for the claimants to renege on their own words.

There must be a clear and unequivocal promise, either by words or by conduct, that the promisor will not fully enforce its legal rights against the promisee.

The promisee must have relied on the promise or representation. Generally, there must be some form of detriment to the promisee; meaning that the promisee is placed in a worse position than before the promise was made. However, a detriment may arise simply where the promisee has been led to act differently from what he otherwise would have done, or merely acted on the belief induced by the other party.

In Collier v P & MJ Wright (Holdings) Ltd [2007] EWCA Civ 1329 (Collier), the Court examined the rule in Pinnel’s Case in the context of contemporary commercial considerations. Collier was jointly liable with two former partners to pay off a debt. He kept up his installments, while the ex-partners defaulted. Collier and the creditor agreed that the debt would be extinguished after he paid off one-third of it. However, once Collier had settled the agreed sum, the creditor issued a statutory demand for the outstanding balance.

(1) a debtor offers to pay part only of the amount he owes;

(2) the creditor voluntarily accepts that offer, and

(3) in reliance on the creditor’s acceptance the debtor pays that part of the amount he owes in full, the creditor will, by virtue of the doctrine of promissory estoppel, be bound to accept that sum in full and final satisfaction of the whole debt. For him to resile will of itself be inequitable. In addition, in these circumstances, the promissory estoppel has the effect of extinguishing the creditor’s right to the balance of the debt.

This suggests that a debt will be discharged where partial payment is made in accordance with a creditor’s agreement.

According to the general rule, promissory estoppel suspends legal rights rather than extinguishing them. This allows the promisor to assert his original rights after giving reasonable notice. Subject to the intention of the promise, the doctrine will suspend a promisor’s legal rights in relation to that promise until circumstances change as in the High Street case mentioned above. The claimant would not be allowed to claim the arrears during the suspensory period