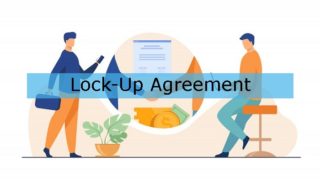 What Is a Lock-Up Agreement?

A lock-up agreement is a provision in an agreement that prohibits or restricts the selling of shares by insiders of the company for a specified period. Generally, they are a part of the initial public offering process. In order to prevent excessive selling pressure in the initial months of trading following an IPO, the underwriters require executives, venture capitalists, and other company insiders to sign lock-up agreements.

How do Lock-Up Agreements work?

Such agreements usually last for a period of 180 days but can occasionally go on for 90 days or even a year long. It is possible for all insiders to be locked up for the same period of time. In other cases, different classes of insiders are locked out for different periods of time. The prospectus documents of a company always disclose the details of a company’s lock-up agreements. These can be obtained by contacting the company’s investor relations department or by using the Securities and Exchanges Commission’s (SEC) Electronic Data Gathering, Analysis, and Retrieval (EDGAR) database.

The main objective of a lock-up agreement is to prohibit company insiders from discarding their shares to new investors after the initial months of an IPO. Early investors such as VC firms could be some of these insiders who bought into the company when it was worth significantly less than its IPO value. So, to realize the gain on their initial investment, they may have a strong incentive to sell their shares.

From the regulatory point of view, these agreements are there to protect investors. Such agreements are meant to avoid situations where insiders throw away their shares on the company investors and run away with the proceeds.

This can be looked up in two ways by an investor depending upon their view about the quality of the underlying company. Where the post-lock-up drop occurs, this can be an option to buy shares at a lower price or temporarily depressed price. On the other side, it can also be understood that the IPO was overpriced, signaling the start of a long-term decline.

Example of a Lock-Up agreement

The parties will be released from their obligation upon the termination of lock-up agreements. This happens when the company elects not to pursue the offering, or if a certain drop-dead date for the offering has passed.

In almost all IPOs, the prospectus of a company discloses whether all or some IPO shares have been locked up. The shares which have been acquired through a directed share program will also be affected by the IPO lock-up.

Lock-up agreements in follow-on offerings, which are often completed much more quickly than IPOs, will usually be obtained only from the issuer and its directors and officers. The other stockholders are not advised by the issuers about a contemplated offering since that itself may constitute material nonpublic information (MNPI), and stockholders generally would not want to receive MNPI as that would prohibit them from trading the issuer’s securities.

There is acknowledgment and agreement in the case of customary lock-up that a party will not:

The lock-up party also agrees not to engage in any hedging, collar (whether or not for consideration), or other transaction that is designed to or reasonably expected to lead or to result in a disposition of lock-up shares during the lock-up period, even if such lock-up shares would be disposed off by someone other than the holder. The prohibited hedging or other similar transactions would include any short sale or any purchase, sale, or grant of any right (including any put or call option or reversal or cancellation thereof) with respect to any lock-up shares or with respect to any security (other than a broad-based market basket or index) that includes, relates to, or derives any significant part of its value from the lock-up shares.

The following exceptions are generally agreed upon by the underwriters:

From the above discussion, it can be concluded that the lock-ups are agreed upon by the underwriters and insiders in IPOs to prevent insiders from selling their stock for a specified period. This helps to ease the company’s pressure during its initial years as insiders are only allowed to sell after the expiry of the lock-up period. Lock-up agreements have a great influence on the investors as their provisions can have a great impact on the stock price.

How much are you familiar with the term “Nominal Value of Share”?