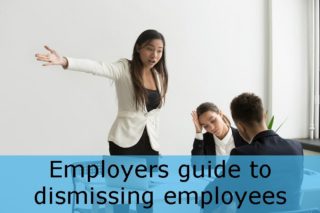 There could be numerous reasons for the dismissal of an employee by the employer, including misconduct, performance, or substandard delivery of work. However, an employer has to determine the rights of an employee before dismissing them from their position. The rights should be determined both from a statutory as well as contractual perspective.

Employment status and the qualification period

The law provides different levels of protection to employees depending upon their employment status. The employees have the highest level of rights and protection as provided by the law, including their right to not be unfairly dismissed. These rights are not available to workers, but  they do have a right to get holiday pay.

Workers include individuals who provide services on a casual basis, agency workers, apprentices, and fixed-term workers.

To bring a claim for unfair dismissal, an employee must be employed for a period of two years unless the reason for the dismissal is deemed automatically unfair.

What is a fair dismissal?

This aspect of fairness is usually divided into two parts:

The employer must follow a fair procedure in order to act reasonably when dismissing an employee. Where an unfair or no procedure is followed, the employer can’t argue that the dismissal of an employee is fair.  The unfair procedure is equal to unfair dismissal. However, due to a procedural failing, the dismissal is found to be unfair, the amount of compensation can be reduced by the employment tribunal to reflect that there would have been a dismissal if a fair procedure had been followed. This is often referred to as a ‘Polkey deduction’ (by reference to the name of the landmark case from which the principle derives).

Some principles of procedural fairness apply to most of the cases which suggests that an employee:

The test as to whether the employer acted reasonably is an objective one. The dismissal of an employee must fall within reasonable circumstances that a business would have adopted during that situation. The resources and size of the employer play a relevant role while considering the reasonableness of the dismissal. The objective test applies to both the employer’s decision to dismiss and the investigation that led to the outcome of dismissal.

In assessing the reasonableness of an employer’s decision-making, the tribunal will emphasize whether the employer has complied with its own workplace policies (for example, a disciplinary policy) and whether it has maintained consistency in dealing with similar issues on previous occasions.

Further, the employer’s action may possibly cause, aggravate or contribute to the circumstances leading to the employee’s dismissal. Such instances include the conduct of other employees or decisions the employer has taken that may have contributed to the employee suffering ill-health, poor performance, or led to a breakdown in trust and confidence. These instances will be taken into consideration by the employment tribunal on considering whether the dismissal of the employee was fair or unfair.

The ACAS Code applies to disciplinary situations (including misconduct and poor performance dismissals but not redundancy or dismissals for ill-health). The employment tribunal must take this into consideration while deciding whether an employer has acted reasonably in relation to the procedure and followed any warnings given prior to dismissal.

As well as affecting the fairness of the dismissal, the amount of compensation can be impacted by the ACAS Code. In order to comply with the code, the employment tribunals have the power to increase or decrease a compensatory award by up to 25% for a party’s unreasonable failure.

There is no upper limit on the compensatory award where an employee was dismissed for health and safety activities or for whistleblowing. In other cases, the usual upper limit will apply.

Dismissing in accordance with the employee’s contract

In case of summary dismissal of the employee which is usually limited to gross misconduct situations, their entitlement to a notice period or get paid in lieu of notice (PILON) is lost. In all other cases, the dismissal of an employee should be in accordance with the employment contract. This means that the employer should ensure that the employee is given the requisite notice period or PILON. It is not necessary for a notice to be in writing unless the contract stipulates it must be. Where there is no notice period set out in the contract, it has to be reasonable and in any event, should not be less than the period allowed by the statute, which is dismissing employees within 12 months depending on the employee’s length of service.

If the employer dismisses an employee in breach of contract, it will lose the benefit of any post-employment restrictions in the contract, for example, a restriction on the employee working for a competitor or contacting the employer’s clients.

Examples of breaches could be, for instance, failing to provide adequate notice where the dismissal was not for gross misconduct. The employee could also bring a claim of wrongful dismissal.

Where an employee is successful in showing that the dismissal was unfair, an award of a remedy can be considered by the employment tribunal which includes reinstatement, re-engagement, and compensation (in that order), as well as costs.

However, these remedies are rarely awarded by the employment tribunals because there has often been a breakdown in the employer/employee relationship and the employee does not wish to continue working for the employer.

The amount of compensation award may be reduced by the employment tribunal if:

As stated above, before applying the statutory cap, the award may be adjusted by the employment tribunal by up to 25% if it deems that any failure to follow the ACAS Code by either party was unreasonable.

Can an employee resign without resignation letter?