Create a Consignment Agreement in less than 5 minutes
with Zegal's document builder.

How to create a Consignment Agreement 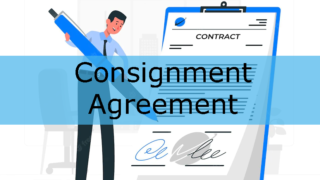 This agreement also protects the unsold goods kept in the storage as they will be returned by the consignee to the consigner with no extra cost involved. A Consignment Agreement is also known as a consignment sales agreement or consignment inventory agreement.

Parties involved in a Consignment Agreement?

What are the components of a Consignment Agreement?

Payment and Commission: Since the consignment arrangement deals with selling goods through the consignee as a third party, the agreement should include a section or several clauses that indicate what percentage of the sale will be kept by the Consignee as a “fee” for its services. This should also mention details about who bears the cost of shipping.

Risk of loss or damage of goods:

This section states the consignee’s responsibility in maintaining and protecting the products while they are in possession, which means that if any products are damaged during that time, the consignee must compensate the consignor for that loss.

Other general provisions: the above are some of the main things that are crucial and has to be covered in a consignment agreement. However, there are numerous other provisions that need to be addressed as well. These have to be put under the general provisions. For example; the governing rule in effect in case of disputes or the process for the same will be mentioned here.

Governing law and equitable relief: This section deals with the procedures that will be taken by both parties when conflicts or disputes arise. It allows the parties to choose the state and county laws that will be used to interpret the agreement. This section also allows the parties to seek equitable relief. For instance, any court remedies requiring a party to perform or refrain from performing certain acts for any violation of the agreement.

How do Consignment Agreements work?

A Consignment Agreement permits a consignee to make a sale or sell off goods on a consignor’s behalf without purchasing them. The consignee gets a commission on the goods sold. It clearly states the obligations as well the responsibilities of both the consignor as well as the consignee involved in the process of selling the particular items.

This arrangement allows for stores and outlets to advertise and market the sale of products without the risk of investing or purchasing the goods. There are two types of consignment agreements, an exclusive and a nonexclusive agreements.

What is the difference between outward and inward Consignment?

Difference between a consignment agreement and a sales agreement?

A Consignment Agreement is usually done by businesses who want to test the demands of the market by storing their merchandise in the consignee’s warehouse. As the consignee sells the merchandise to customers and transfers the payment to the consignor after deducting the commission fees that are specified in the agreement.

How to decide between a sales agreement or a consignment agreement?

The two agreements have a very different use, purpose, and outcome. Choosing one that is best suited for your needs will largely depend on what you are looking forward to from your business. For those, who want to expand into new markets and get into large-scale production and distribution, a consignment could be more suitable and better for the purpose of your business. On the other hand, if you are looking to increase your profit margins only, you could go for a sales agreement to avoid paying the extra remuneration fees to the consignee.

What benefits of having a consignment agreement?

Consignment in general, allows businesses to run in a more cost-effective manner. It allows for the focus to be on manufacturing and producing the goods rather than storage if it. It is a great way to scale up the business. It also allows for wide geographical expansion by allowing local market experts to operate in a market they are familiar with. However, every local jurisdiction will have its own rules and system in place and so a consignment agreement helps ensure that both parties have a good base on all such legal grounds.

Consignment agreements also allow consignee to improve their gains through sales and commissions. It is also just as beneficial for consigners as well. They can sell items and make revenue without having to pay an upfront fee. For consigners, another added benefit is being able to restock goods as it flows without having to purchase more new ones.

If you're creating a Consignment Agreement, you may also be interested in the following documents: