What is a Settlement Deed?

Articles » Small Business » What is a Settlement Deed?

“A properly drafted settlement deed will give room for a ‘clean break’ and provide the parties with protection against liabilities.” 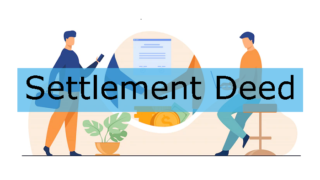 Akin to a divorce settlement, and hopefully negotiated in more favorable circumstances, a settlement deed is an agreement by which two parties negotiate an alternative outcome to the termination of a contractual arrangement.

The goal of a settlement deed is to allow for more favorable terms than would normally occur from a breach of contract.

Settlement deeds are nothing new to the commercial environment and are used in almost all companies across industries. However, drafting this legally binding document can still be an extremely meticulous and risky task, especially when you’re not sure what to include within its terms.

This article elaborates on what a settlement deed is and the key elements you should look out for when drafting one. What is a settlement deed?

A settlement deed is a legally binding contract that, as the name suggests, settles claims regarding a dispute between two parties in a severed contractual arrangement.

Essentially, under the terms of a settlement deed, the parties acknowledge the termination of the contractual arrangement and agree on the measures to be taken to ensure a smooth outcome – usually more favorable to both parties than penalty damages.

A common situation for agreeing to a settlement deed is during a termination of employment where the employee is granted severance compensation from their employer in return for their agreement not to bring any claims against their employer in the tribunal or court.

However, the use of settlement deeds are not limited to an employee’s termination and can also be used during the course of an ongoing term of employment where parties simply want to settle a dispute that has arisen between them.

When to use a settlement deed

While there are a range of varying situations whereby a settlement deed may be implemented, it is most often used when employers want to terminate a contract on mutually agreed terms with their employees, thereby reducing the risk of the employee bringing an employment claim against the company in the tribunal.

Oftentimes, signing a settlement deed with pre-determined agreed terms can be seen as a short-cut, avoiding the long and arduous process typically associated with terms such as conducting a performance review or a full redundancy process.

Alternatively, if an ongoing commercial contractual relationship needs to be terminated by either party, it may be preferable to negotiate specific remediation agreeable to both parties to make up for any damages or hardship.

In order to serve its central purpose of circumventing the long-drawn and laborious process of conducting a formal breach of contract procedure, an equal and fair deal must be reached between the two parties.

This means that the terms of the settlement deed are mutually agreed upon by both parties and will be set out in the written settlement agreement document, stipulating exactly which claims the parties agree not to pursue in court in exchange for other benefits or compensation.

Thus, it is extremely important that both parties understand what they are hoping to gain respectively; for example, one party may want financial compensation whereas another may want restitution or assets allocated and a non-competition / non-circumvention agreement in place.

The terms embedded within the settlement deed must be bespoke and highly customized to cater to the expectations and needs of the specific employee in question. By the same token, it is crucial for the parties to ensure that the deed includes an express waiver of the relevant claims that the infringed party may have access to under the terms of a breach of contract.

What financial terms should be included in a settlement deed?

The settlement deed should contain a clear breakdown of the amount the party will be compensated with as well as any other additional payments which have been agreed on. The deed should also clearly stipulate the payment terms of the payment if applicable.

What factors are important to the negotiation of an employment termination settlement deed?

If an employee is entitled to any bonuses or commission accrued over the term of their employment, this amount owed should be clearly stated within the settlement deed. Again, it is extremely important you thoroughly confirm that all contractual bonuses and commission are stipulated and paid in full within the contract.

Similarly, pension contributions should continue during your term of employment and notice period unless your original contract states otherwise. Alternatively, your employer may arrange for your lump sum to be paid into your pension as part of the settlement terms in the deed; this may also be paid free of tax.

As for the exact amount which should be paid to the employee within the settlement agreement, there is no exact amount as it is highly dependent on a multitude of factors such as the circumstances surrounding the employee’s termination, the employee’s own preferred form of compensation, and the claims that may have arisen over the course of employment.

It is, therefore, necessary to consider the settlement holistically and factors such as the duration of employment, the circumstances surrounding the employee’s termination, how long it would take to settle the dispute in an employment tribunal, and the cost involved with defending such a claim in court.

It may also be the case that the employee would prefer to benefit partially from non-monetary compensation. For example, it is common for the parties to agree that a reference will be included within the settlement agreement.

The deed may also include a clause stating that when constructing this deed, the employer will not deviate from the pre-determined wording of the reference which has been agreed on as part of the settlement deal.

What other remediation terms are possible within a settlement deed?

A settlement deed may also usually include a non-disclosure or confidentiality clause, stating that the parties will keep the terms of the agreed clauses, the financial compensation amount, and the relevant circumstances leading to the deed confidential.

Additionally, it may be desirable to include clauses restricting any negative, defamatory or derogatory comments about the respective parties as they proceed to sever their contractual arrangement.

Settlement deeds have proven to serve as a valuable tool in the corporate and commercial world, ensuring that party contractual disputes are settled as non-contentiously as possible without the need for formal legal action, often even before they are brought to the court.

That being said, the process of drafting and agreeing to the relevant terms of the deed can be both a laborious and time-consuming task. That’s why we advise obtaining professional advice from our experienced team before engaging in serving a settlement deed.