What is a Promissory Note?

Articles » What is a Promissory Note? 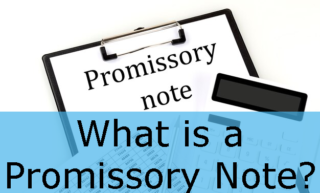 A promissory note also referred to as an IOU or loan agreement is a written promise to pay someone within a specific time period.

This type of document is signed by both parties and is used commonly in various financial services such as loans. The promissory note serves as formal evidence that a loan has been made by one party to another and contains an unconditional promise by the borrower to repay all sums back to the lender under specified terms stipulated in the note.

When should I use a promissory note?

As detailed in the next section, promissory notes are used in practically every loan transaction involving borrowing and lending between parties. If you or your business are lending a large amount of money to another individual or company, then you may want to create a loan agreement to act as a legally enforceable record of the loan that will protect you and help make sure you are repaid in due course.

While straightforward in theory, promissory notes can often seem complex and convoluted in order to fit the transaction that each party is involved in. Because it is used in a vast array of contexts, no two notes are the same and certain features or conditions detailed within the note may dictate different procedures when it comes to how much is paid back at what point in time. The type of promissory note you or your business will issue often depends on the property the loan is being borrowed for. Here are a few of the most popular types of loan agreements:

Informal IOU – Also known as personal or simple promissory notes, these are typically between one friend or family member to another. This is a written guarantee that the money borrowed will be returned but does not always detail the purpose of the loan and will likely not involve a repayment schedule or interest charge. For example, you lend your friend $1,000 and he agrees to repay you by December 1.

Commercial IOU– These are considered more formal and may be seen in more high-value business transactions, for example, borrowing money from a commercial lender such as a bank, credit union, or loan agency. The lender in question will often require borrowers to repay the loan with interest.

Student IOU – When taking out a student loan, the terms and conditions stipulated within a student promissory note will often defer interest from accruing on your loans until after you graduate. Additionally, the start date is often flexible and undetermined until you graduate.

Investment IOU – A company can issue a promissory note when raising capital from investors. Investment promissory notes ensure that the investors receive their return on investment over a specified period. If the borrower doesn’t pay back the money, the investor may legally take ownership of the company.

How does a promissory note work?

After a promissory note is established between parties, there are four main ways for a borrower to repay the loan and interest to their lender.:

Lump-sum – This means that the entire value of the loan will be repaid in one payment to the lender. Lump-sum payments are common with small or informal loans where lenders will tell the borrower when the loan is to be paid back, and the borrower will not have to make monthly payments.

Installment – This is the most common form of repayment where a specified repayment schedule is established, allowing a borrower to pay back a high-value loan over time. The installments, or payments, are typically made monthly and are equal amounts each month to add up to the total value of the loan. The payments will often include interest until the total principal is paid off.

Due on demand – Also known as open-ended loans, the borrower must repay the loan when the lender asks for repayment. This form of repayment is more common for informal loan agreement and is typically between friends and family. If a promissory note does not have payment terms listed on the document, it will be considered due on demand.

What terms should be included in a promissory note?

A promissory note should include all terms and details to which both parties of a loan are agreeing. The most common terms found in promissory notes include the following:

Payor or borrower – Include the name of the party who is to repay the relevant debt.

Payee or lender – Include the name of the person or institution lending the money to the payor.

Date – List the exact date the promise to repay is effective.

Amount or principal – State the amount of money borrowed by the borrower.

Interest rate – If the loan involves interest, the promissory note should include the simple or compound interest rate charged.

Details of repayment – A common arrangement is to have payments due on the first of every month. Alternatively, if multiple payments are due, the promissory note should include how often payments will be made as well as the amount of each payment.

Signatures – For a promissory note to be legally enforceable, you must ensure that signatures of both the borrower and the lender are included.

Does a promissory note need to be notarized?

A promissory note is a legally binding agreement similar in nature to any common law contract. Relevantly, in order for a contract to be enforceable, it must contain certain legal conditions such as an offer and acceptance. When all the terms and conditions stated above are addressed and it is signed by both parties, the promissory note becomes a legally binding contract, meaning that it will not need to be notarized in order for it to be effective. However, businesses may nevertheless choose to have promissory notes notarized in order to avoid potential disputes over authenticity even if the governing law does not require it.

Are promissory notes right for your company?

For early-stage businesses in need of initial financing, promissory notes are an essential instrument in obtaining a loan from financial institutions or other investors. To protect your personal assets from the liabilities and obligations that arise from your company’s business activities, your business may choose to issue promissory notes in its name to lenders.

While promissory notes may appear simple and straightforward, understanding them and the different ways they can be used for you and your business specifically can be complex and time-consuming, especially during the early stages of its lifecycle.

READ MORE: Five Clauses Every Shareholders’ Agreement Should Include.