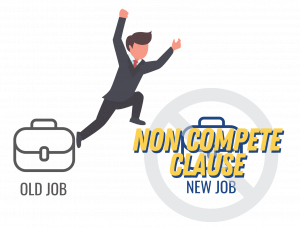 What is a Non-Compete?

Non-compete  lowers the risk for employee about its trade secret client lists, and other strategic resources. It allows companies to claim a protectable interest in employees’ expertise and “inside knowledge” as well as their work.

For Employee, non-compete clauses hinders. Experts have acknowledge that such clause limit’s employees personal abilities as they are restricted to implement their ideas and limit to certain period of time.

When is it useful?

Non-Competition Agreements, or non-compete clauses can help a company retain valuable employees, protect confidential information, such as its intellectual property or its trade secrets and customers, and prevent unfair competition.

When is my Non Compete Clause not enforceable?

However, non-competes are a severe restriction on commerce and an individual’s ability to find employment or work to make a living. For this reason, there is a trend towards limiting the enforceability of such clauses. The enforceability of such clauses varies a lot depending on the jurisdiction and differences may even exist within a jurisdiction (for example different rules exist from State to State in the United States).

A non-compete agreement will only be enforceable if it can be shown to be supplemental to another enforceable contract. Most states recognize two such instances. The first is an employment contract, and the second a contract for the sale of a business. States are more likely to enforce non-compete clauses in the latter case than in the instance of an employment contract.

Non-compete clause are enforceable  only if it can be shown to be supplemental to another contract. non compete enforce-ability, One should demonstrate the non-compete clause is important to protect legitimate interests.

Requirements for a Reasonable and Enforceable Non Compete Clause

As a general rule, in order to be enforceable, a non-compete needs to be reasonable.

While the exact conditions and appropriate wording of a non-compete will highly depend on the jurisdiction and local standards, the following general guidelines should be taken into consideration to ensure reasonableness and enforceability of a non-compete:

Essentially, this means that the employee/contractor should obtain something of value in exchange for his or her agreement not to compete. Consideration can be in the form of payment of money or something else of value. For newly hired workers, the employer’s willingness to hire the individual can be indicated in the agreement as the value exchanged for the worker’s agreement not to compete. However, for existing or outgoing workers, additional consideration is required to make an agreement enforceable.

To be reasonable in scope, the non-competition should be designed to protect legitimate interests of the employer. It therefore needs to be reasonable  with regard to:

Depending on the type of work, competition could be restricted for a specific business or industry.

The restriction to compete should last for a reasonable amount of time, which depends on the fact and circumstances of each case and will vary depending on the type of work and industry.

While a prohibition to compete for the rest of a worker’s life will most probably not be enforceable, in many industries, a non-compete with a duration of 6-months will be considered reasonable, and therefore enforceable. The general rule is that the duration of the agreement should not exceed the time reasonably required for protecting the employer’s legitimate business interests.

Non-competes oftentimes describe a restricted area in which the employee or contractor cannot compete. Again, what is considered reasonable in terms of geographical restriction will depend on the fact and circumstances of each case.

Since the enforceability of non-compete provisions is highly dependant on the jurisdiction, it is important to provide for the appropriate law to govern the agreement. Enforceability, as well as available remedies in case of breach, can be different from jurisdiction to jurisdiction and this should be addressed.

How Non Compete Clauses are Enforceable – A Classic Example

Bob works as a software engineer and has been offered an independent contractor agreement  by Automotive Corp for the development of a software for self-driving cars that comprises a non-compete.

The non-compete clause provides that Bob is restricted from performing any services as an engineer, whether indirectly or directly competitive with his employer, for five calendar years post-employment and without a geographic limitation.

Ultimately, this would mean that Bob is not allowed to work as as a software engineer in any capacity for five years. This appears unreasonable and unnecessary to properly protect legitimate company interests.

However, in case the non-compete prohibits to work in the field of software engineering for self-driving cars, for a direct competitor during 6-months following employment and within the same state, this would seem more reasonable and therefore enforceable.

READ MORE:
7 Most Important Points to look for before signing an Employment Contract
The Importance of a Non Compete Clause