Non-Compete Agreements – Everything you need to know

Articles » Non-Compete Agreements – Everything you need to know

What is a Non Compete Agreement? 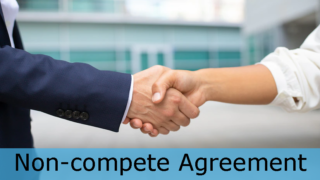 The contracts usually mention a period of time during which the employee is barred from working with competitors after his employment is over. The employees may be required to sign these to maintain their business in the market. These agreements may be required to be signed by employees, contractors, and consultants.

The validity and enforcement of such clauses or agreements differ from jurisdiction. During the non-compete period, the former employer could be required to pay a base salary by the ex-employee. We can say that non-compete clauses or agreements legally bind current or former employees from competing with the employer for a certain period of time. Along with the period of time, such contracts also mention the geographic location or the market in which an employee is prohibited from competing with the employer.

These agreements are signed at the beginning of employment or when the relationship between employer and employee begins. Using such contracts, the specific actions of an employee are controlled by the employer. The specific clauses stated in these agreements could be: an employee will not work for a competitor after the employment is over, irrespective of whether they are terminated or resigned. Even if a new job doesn’t require disclosing trade secrets, the employees are still prevented from working for a competitor.

As mentioned above, these contracts may include the length of time the employee is bound to the non-compete agreement, the geographic location, and/or market. These agreements may also be called a “covenant not to compete” or a “restrictive covenant.”

Industries That Use Non-Compete Agreements

These agreements are commonly used in the media industry. They are also common in the information technology (IT) sector, where employees are often charged with proprietary information that may be deemed valuable to a company. Other industries which use such agreements include the financial industry, the corporate world, and manufacturing.

There is a distinction between non-compete agreements and non-disclosure agreements (NDAs). NDA’s generally don’t prevent an employee from working for a competitor. Instead, NDAs prevent the employee from disclosing information that the employer considers being proprietary or confidential to the competitor, such as client lists, underlying technology, or information about products in development.

Advantages and Disadvantages of Non-Compete Agreements

A non-compete agreement may be daunting for the employees who, after leaving their industry entirely, find it too hard to get a new job after signing such agreements.