Create a Letter Ending a Contract Unilaterally in less than 5 minutes
with Zegal's document builder.

What is a Letter Ending a Contract Unilaterally?

A Letter Ending a Contract is a letter that is used by a company or business to formally end a contract with another business. It is important to establish how and when a contract can be ended and if there are any repercussions for doing so.

How to create a Letter Ending a Contract Unilaterally

What is a Letter Ending a Contract? 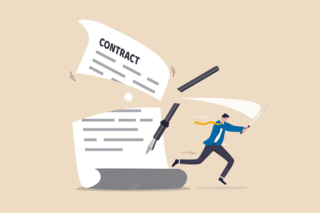 What is the purpose of a Letter Ending a Contract?

This type of letter is considered a legal document as well as a business courtesy. The goal is to make a clear and concise request for termination and to avoid any misinterpretation. It is used specifically for business agreements in which products or services are delivered on a regular basis and must be concluded. It also ensures that the process is properly documented to avoid conflict. A Letter Ending a Contract can be used for the following situations:

How to write a Letter Ending a Contract?

A lot of businesses these days need to hire contractors or consultants to improve the productivity or overall efficiency of their business however hiring a consultant or contractors doesn’t guarantee success. If the overall quality of work is not satisfactory or not as per the business standard, a Letter Ending a Contract can help businesses to get rid of those contractors and hire a new one. These are the important things that should be mentioned in a Letter Ending a Contract.

The letter proves that you have duly followed the required procedures and also notified the other party. Termination letters are used to disengage the service of employees but for working employees in a company, it has to be compliant with company policies.

Why do companies end contracts?

A prior arrangement or completion of contract:
All contracts are drafted with a certain time period in consideration. This is arranged for before the contract is signed. But, some contracts automatically renew when the stated time period is over. In such a case, if one company does not wish to continue with the renewal, it will have to end the contract.

Failure to perform or deliver:
This is when a company or a party fails to fulfill its responsibility or deliver as promised. The unsatisfactory results can prompt the other company to take quick action and end its contract.

Breach of contract:
Contracts are put in place so all parties are well aware of their responsibilities as well as their obligations. Breach of contracts is a serious offense that can lead to the abrupt ending of a contract. It can often be followed by legal consequences too.

Why is a letter ending a contract important?

There is a wide range of contracts that need to be used in the course of doing business. Legal documents for a business play an essential role in protecting the interests of a business and the business owners over the course of a company’s lifetime. A Letter Ending a Contract is a formal declaration written by a business to legally terminate a business contract with another party immediately or by notice. It is required when there must be a clear written record of how and when a contract is to be concluded, creates a record of cancellation, and lists consequences for doing so. Furthermore, it can be used as a courtesy to thank others for their service.

If you're creating a Letter Ending a Contract Unilaterally, you may also be interested in the following documents: