Create a Mutual Termination of Contract Letter in less than 5 minutes
with Zegal's document builder.

A Mutual Termination of Contract Letter is an acknowledgment of a contract between two parties that has been mutually terminated.

How to create a Mutual Termination of Contract Letter 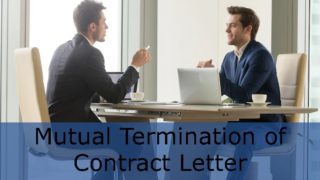 Simply put, this is a letter sent by one party of a contract to another to acknowledge the mutual termination of a contract.

Essentially, when a contract comes to termination by mutual agreement between the parties, sending A Mutual Termination of Contract letter serves as an acknowledgment of the ending of any obligations. Additionally, it provides an official record of the fact that the relevant contract has come to a close by mutual decision. Importantly, this records that there is no further obligation on either party under that contract.

Basically, it is a courtesy letter that helps facilitate good terms between the two parties despite the termination. As well as providing a record that there will be no further discussions or legal disputes forthcoming.

When to use a Mutual Termination of Contract Letter?

Usually, you’ll use this letter if an agreement is no longer effective. Or, if the parties have ceased business operations. Or, if the agreement can no longer be faithfully performed. Often, this is when the parties may decide to formally terminate the agreement in writing. Subsequently, when both parties agree under mutual consent to the termination, use the Mutual Termination of Contract Letter.

Conversely, when this decision is enforced as a right under the agreement by only one party, use a Letter ending a contract.

What is a deed of mutual termination?

It is a separate written binding legal document that confirms that both parties mentioned in the contract intend to mutually cancel the original signed contract.

When should you use a deed of mutual termination?

You can use a deed of mutual termination in the following situations:

To sum up, this simple letter is the best way to acknowledge the mutual termination of a contract. You will use this letter to keep a record that there is an agreement to no longer have any further obligation to the other party.